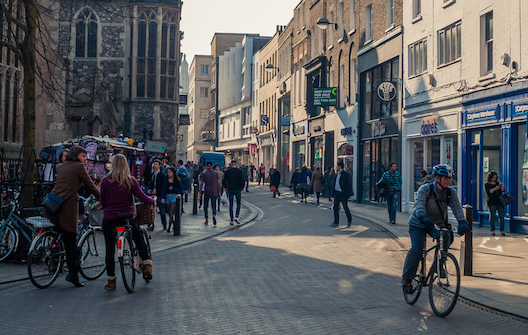 Joan Morrell founded Cambridge Modern Jazz Club in 1972 and ran it successfully until her death in November 2011.

Like Joan herself, the club has never been comfortable with the status-quo and over the years has inhabited no less than ten venues around Cambridge. These have ranged from pub rooms to restaurants, night clubs and even the idyllic surroundings of Kettle's Yard, one of the country's leading modern art galleries. The club now enters it's fifth decade in robust good health at the Hidden Rooms, Jesus Lane. As Joan was always quick to point out, CMJC is the longest standing jazz club in the East of England...and long may it continue!

Ever a modernist, Joan played a major role in developing the early careers of numerous fledgling players who went on to become internationally renowned artists. One such, Iain Ballamy, remembers Joan's enthusiasm to programme new, experimental, imaginative and sometimes obscure acts. Joan's guiding principle was to champion, respect and support the music rather than ticket sales.

Joan's policies have earned the club genuine respect and credibility from the multitude of musicians who have played here and the numerous established and young artists seeking to use our platform today.

The club is now run by a strong committee which continues to promote the highest quality in creative music. CMJ has rightly earned its place as a prime venue for national and international touring artists. Truly the home of jazz in Cambridge.

Take a look at this fantastic article that tells you so much more about this great venue.