To celebrate the 50th anniversary of Joni Mitchell’s seminal album “Blue” with classic songs “A Case Of  You” : “My Old Man” and many more, we present the outstanding singer/pianist Joanna Eden.

Following on her many sell out shows with Jazz at The Movies, Swinging Christmas and her Embraceable Ella, and Joni Mitchell’s  “Clouds” album, Joanna returns to Crazy Coqs with this further celebration of the life and music of the iconic US singer/song writer.

Starting as a finger-picking folkie and winding up as a jazz-savvy experimentalist, Joni Mitchell has brought a sharp eye, light touch and an agile trill of a voice to her songs, which have often dissected her romances and skewered myopic governments.

Mitchell became a critical sensation on Detroit’s folk scene, and her notices led to a series of  successful engagements in New York. These early songs, ”Both Sides Now”, “Eastern Rain”, “The Circle Game” & ”Clouds” have become standards.

“Joanna is the reason I sing” – Sam Smith 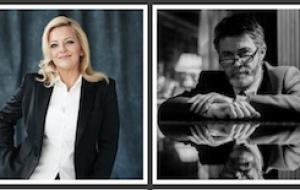