In this second concert in the festival we bring together two of the brightest, youthful British jazz guitarists, Nick Fitch and Jamie McCredie. Both are already playing top jazz clubs and theatre settings and making waves among fellow musicians and developing loyal followings among the ticket buying public.

Nick Fitch, a graduate of the Guildhall School of Music is not only a guitarist of considerable ability, but also a musical director and arranger.

His wide skillset and experience in a variety of genres has led to working with artists such as Sophie Ellis-Bextor, Brendan Cole,James Hudson and Lee Mead, plus in the jazz world with Claire Martin, Nicole Henry (playing and directing in her Aretha Franklin music U.K. tour), Tina May, Jim Mullen and Laurence Juber

Nick is a regular performer in West End shows including, Hamilton, The Book of Mormon and Pretty Woman. He is currently the guitarist on the BBC Radio 2 Sound Of The 60s Live with Tony Blackburn and in the Leo Green Orchestra tour .

Jamie McCredie, also a Guilhall graduate, has cemented his reputation as one of the UK's busiest and most versatile guitarists.
He played guitar in Rosin Murphy’s European and US tour, on her recent Mercury Music Prize nominated album Hairless Toys, and her latest release Take Her Up To Monto.

Jamie has featured live & on record with Tokio Myers, The Saturdays. Will Young, Simple Minds, Jools Holland and Melody Gardot. His guitar playing and arrangements have featured in many dramas and film scores

Jamie leads his own band and performs frequently as a soloist around the UK. He is enthusiastic about exploring the gaps between jazz, rock & classical harmony, and with a focus on modern, memorable melodies 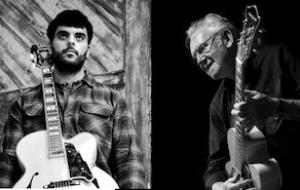