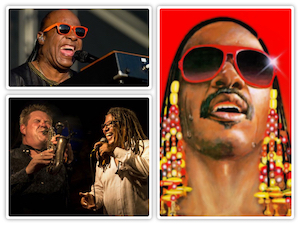 Some Kinda Wonderful
- The Music of Stevie Wonder

It’s a very special warm welcome to  Derek Nash, Noel McCalla and the Some Kinda Wonderful band for this four night residency of the music of Stevie Wonder at London’s newest  jazz cabaret venue Piano Smithfield.

After many sensational sold out shows, with audiences up on their feet dancing and demanding more and more, we had to make plans to handle the high demand letting you chose your dates for this “Master Blaster” of a Show.

‘Some Kinda Wonderful’ celebrates the life-time genius of Stevie Wonder, with mesmeric vocalist Noel McCalla, the award-winning saxophonist Derek Nash and a band of world-class musicians.  They arrive at Piano Smithfield to play a wide-ranging catalogue of classic hits, guaranteed to appeal to anyone who loves great music.