The Darius Brubeck Quartet –
“In Their Own Sweet Way”

Darius Brubeck, son of the legendary Dave Brubeck, and an inspiring international jazz pianist in his own right, arrives at Crazy Coqs, with his Quartet, to celebrate the Centenary of his late father, in their own sweet way.

Successful international tours have continued and his most recent album The Darius Brubeck Quartet: Live in Poland, recorded at the end of their historic 2018 sold out tour and released in December, 2019. Live in Poland was given four stars in the May 2020 issue of Downbeat, five stars in the March issue of Jazzwise and praised in The Financial Times.

Nearer to home his sold out appearances at the London, Cheltenham and Glasgow International Jazz Festivals, and acclaimed evenings at Ronnie Scotts and Pizza Express Jazz Club, demanded we bring Darius, with his quartet, to Crazy Coqs for their debut appearance.

During the 1970s, Darius toured the world with Two Generations of Brubeck and The New Brubeck Quartet. He moved to South Africa in 1983, initiating the first degree course in Jazz Studies offered by an African university, eventually founding the Centre for Jazz and Popular Music.

Following the success of the CD “Cathy's Summer", featuring many new Darius Brubeck compositions, and their follow up album "Years Ago", this concert of acoustic music - melodic, spontaneous, rhythmic and engaging, will include standards,South African jazz and ever-popular Dave Brubeck music.

To sing a Darius & Cathy Brubeck original song plus lyrics set to a Dave Brubeck tune, the Quartet are joined by the talented young British singer Ruby Gascoyne, following her Crazy Coqs June debut singing the music of Liza Minnelli.

“The combination of Brubeck and O’Higgins is certainly among the best piano/sax partnerships in the UK”. – Tim Dickerson - Jazzwise

A fantastic Autumn of Jazz with JBGB Events at Crazy Coqs, London. 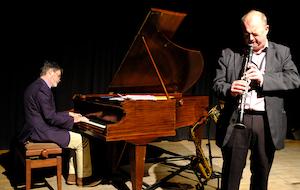